It was not the first space, which I explored being blind. And I was interested what is a different between the art museum and, for example,  Kyiv Metro? What determines the space? How do people react to a person with disabilities? My "spectators" were Donetsk students and museum old women workers. First one feared and were on a distance from me. Women were also scared, but about pictures security. They began to kick me out. After my explanations they calmed and warned when I was too close to picture. Still there was a fussy atmosphere like on a train station, or I felt so because of the guide, who was very quickly talking about "our high art". 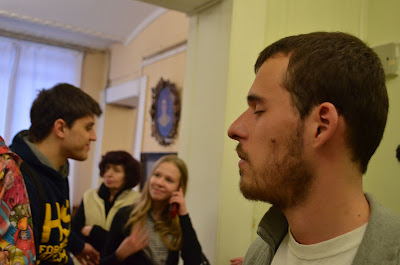 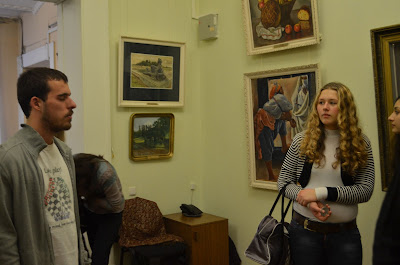 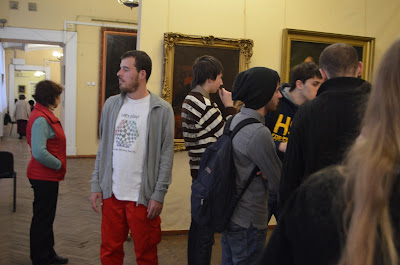 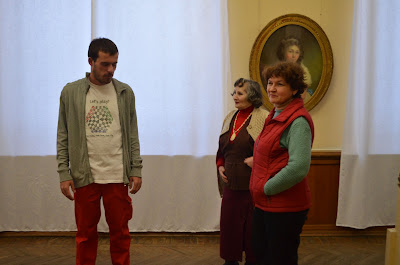 In some places I had strong desire to feel the space. I opened eyes only when I went out from the museum. So did I visited all museum? I don't know because when you are blind the whole space is sphere around you that has sounds and silence.

The second dimension was a perception of time. The performance consisted of three equal-length parts. In the beginning I told students some theory about performance art. During the second part I was standing on my fists and on my back ordinary cinder block was lying . It was so heavy that I hardly brought it to the museum. After ninth minute my body was shaking because of tension. And during the third part we were looking on each other in silence.

After the end some girls asked me "never more do like this". And some participants were mostly affected by third part. Museum workers that time welcomed me on the museum entrance and came to see a performance. Afterwards one of them said something like "oh, what's a man".

This part was a performance about naked body in the context of Donetsk. Also it was a protest against the closure of the "Ukrainian body" exhibition in Kyiv Center for Visual Culture by rector of Kyiv Mohila Academy. I thought it was impossible. To be naked in the center of Donetsk and not to feel aggression. Generally even talk about nudity in Donetsk public place caused irritation and accusations of "porn". But for me it's a completely different topic. If person begins to want sex at the sight of the naked body, then he or she has just not enough of it. None of the art museum did not know about this action. They invited to do only 2 performance. So there were not students. And even museum in that was closing one hour early. So i decided to do an action outside. There were a lot of people. But in a few moments they left. During the performance several passengers went to other side of the street. The camera stopped shooting soon after begging. However one woman passed nearby and told: "Ah, there is some actionism".